Death is and crossing over follows; the story of the Aethiest Rock.

There is a natural process that automatically unfolds as you are dying that is assured as the process of birth; you do crossover to a different realm of existence when your body dies. For birth, we all seem to know and 100% agree that the baby must come out of the womb as the next step in the quest for experiencing life. You can even say that the baby crosses over from one realm to another as it transitions from the unknown to the womb, and then to independent life. Well, death operates in the same way essentially, but in reverse; you shed the body and return to a different state of consciousness in a different realm. When you die it goes to follow that you are supposed to cross over to this different space or essentially return to the essence of your soul. Many people call this place Heaven, communion with God, Pure Consciousness, the Oneness, meeting your Maker, or even simply the Otherside. However, this very process of dying and then automatically crossing over seems to be a mystery to most people when in fact it should not be a mystery, it is just a natural system.

I am absolutely, 100% sure, something transpires after your body dies because of the countless experiences I have had engaging with the Otherside. My very first conscious experience of witnessing a dead person cross over to the Otherside happened while I was driving in the silence. When I drive I rarely ever play music in the car because I truly enjoy the silence, and this day was no exception. I was alone, or so I thought when I realized I was engaged in a conversation. Literally, I became aware that I was having a discussion with someone I could not see. I could hear myself talking but I was not purposefully talking in this realm; I was witnessing my soul have a conversation. 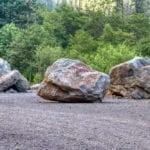 I heard myself say, “What are you doing?” He said, “I am being a rock.” I said, “Why are you being a rock.” He said, “I died and I have returned to the Earth.” I said, “How can that be, you can not be a rock because you are talking to me.” He said, ” yes, I have died and now I am one with the Earth.” I say, “Well that is ridiculous! You have not returned to the Earth because you are having a conversation with me. You are supposed to cross over.”  My brain is freaking out, what is happening?

I am listening to a conversation that part of me is having with a person I can not see. A conversation with a person I can not see and who is claiming to be a rock. What in the world is happening where I can be fully conscious and aware that part of me, which is exceptionally calm, is engaged with a dead, rock person. The panic begins to subside as I choose to allow myself to listen to this deeper part of me that apparently knows what is going on.

I say to him, “You have to cross over. You are not a rock because you are talking to me.” He responds, “I do not know how to cross over. I do not believe in God. I have returned to the Earth.” I witness myself saying, “it does not matter if you are an atheist or a rock or if you believe in God, you have died and your soul needs to continue on its journey and cross over. There is a system.” WHAT? Where is this wisdom coming from? Then, we both feel a very deep, loving presence. 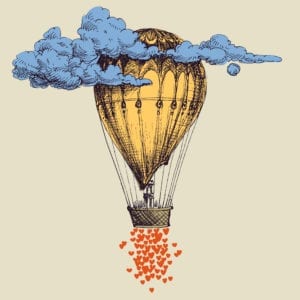 The love is all-encompassing and tears of joy are running down my face. He asks me,” how do I cross over.” I panic a tiny bit again and repeat, “I have no idea but you are supposed to cross over; there is a system.” And then in the next breath, the rock transformed into a man, who transformed into a hot air balloon man and he was gone. He had disappeared and the conversation was over. A door shut and the all-encompassing sensation of love was gone.

I stopped the car and remained very calm. With my whole being, I understood that he had crossed over. He had crossed over through his perception of the world by becoming the only mode of floating transportation that he knew existed during his time in history; he became a hot air balloon. His perception of the world had included the idea that heaven was a physical place up there somewhere so off he floated. He did not have to believe in God to cross over into the all-encompassing sensation of love. He just had to connect and allow. And so it was.

Since this conversation, I have literally assisted countless people/ghost with this process. I remind them to connect with their version of love inside of their own heart and a doorway or pure love opens and they cross into a different realm. Every person’s experience is unique to them but the same general principle always applies; you are to carry on into something that is greater than your life experience. I have never witnessed someone being rejected for their beliefs or actions, and trust me there have been some very dark ghosts entrenched in fear with a list of cruel behavior. They cross if they accept the love. Accepting the love is the only condition. Love heals everything.  You are loved no matter what. And, what you believe is always honored by the omnipotent love.